“This room is a “home office” a few years after the turn of the century,” the guide began. “Look at the cumbersome desktop computers, heavy and expensive. Some of them cost more than a thousand dollars, several months’ rent, and had to last for years.

“Just a few years before this, a user would have to connect to the Internet using a telephone line. The early speeds were very slow. On the earliest models, e-mail was downloaded at reading speed. Until the end of the century, it was possible to think of a computer as separate from the Internet, as strange as that seems now.

“Who would like to try to pick one up? Careful: the front of it is made of glass.” 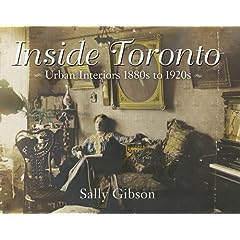 This is an essential book for anyone with a pre-1918 Toronto house and is curious about how the earlier owners lived.A paradox with the material, which the author handles resourcefully, is there are few images of daily life in an ordinary Toronto middle-income home in this period to work with.

The top and bottom of the socioeconomic ladder are very well-documented.

Toronto plutocrats like Sir Henry Pellatt or John Ross Robertson, having built their lavishly appointed homes, then had them photographed in great detail for posterity, down to the children’s bedrooms and glittering plumbing fixtures.

It took me a while to realize that the images of Casa Loma when Pellatt actually lived there reminded me of the Richie Rich comic books – it has the same over-the-top effect.

On the other hand, social workers in the same period produced a large number of images of poverty: really foul slums like the Ward, the area more or less where City Hall is now, or pre-gentrification Cabbagetown; a flophouse that looks a lot like a modern homeless shelter; the filthy cells under the Court St. police station.

So for the most part what is being documented, as interesting to contemporaries, is the exceptional, either of wealth or poverty.

This is the usual problem of the social historian – many of the things you’d most like to understand were considered too ordinary and universal to document at the time they were happening. I’m sure we’ll be frustrating for the same reason a half-century from now.

… It is clear that some of these images were intended to satisfy voyeuristic appetites as well: many of the images in the book appeared initially in the Toronto Globe newspaper, and more than a few of the excerpts Gibson quotes suggest that their writers reveled a little in moral superiority at the squalor and horror of the lives of the ‘great unwashed’ depicted in some of the images. Similarly, the photographs of some of the city’s more richly adorned salons and ballrooms (published originally in magazines like Saturday Night) seem to have been meant to serve the public’s voracious interest in the lives of the rich and powerful, as well as to record for posterity the legacies of Toronto’s prominent industrialists and politicians. At both ends of the social and physical spectrum, these photographs captured the city’s desires as well as its fears.

Having said all that, we recognized a larger version of our pre-renovation kitchen in a new one being shown off in about 1920, a larger (but still recognizable) version of our second-floor bathroom, and our former fireplace tiles in an editor’s office at the now-extinct Toronto Telegram.

I think it really needed a professional archivist (Gibson, a sometime co-conspirator of More Coffee Please, now works for the Toronto archives) to unlock the City’s enormous motherlode of historic photographs.

I’ve found some wonderful images in the City archives, but I’ve come across useful material by accident at least as often as on purpose.

Photographs are filed by the name of the institution that produced them (parks department, city solicitor’s department and so on), and each institution had its own system.

The TTC fonds, for example, are filed in chronological order, which almost reduces you to opening books at random.

To its credit, the archives recognizes that hypertext and scanned images are the solution, but the scanning and cataloging is an enormous project.

If you’re thinking of buying it, it’s much cheaper from Amazon (.com, not .ca) than from the publisher.