Home
»
Current Events
»
This doesn’t get any better 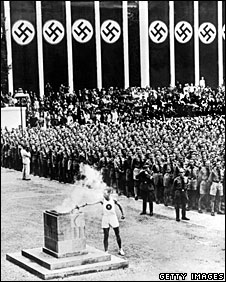 By Chris Bowlby
BBC News
The Olympic torch is being welcomed this weekend in the UK as a symbol of the sporting spirit, uniting people around the world in peaceful competition.But the idea of lighting the torch at the ancient Olympian site in Greece and then running it through different countries has much darker origins.It was invented in its modern form by the organisers of the 1936 Olympics in Berlin.

And it was planned with immense care by the Nazi leadership to project the image of the Third Reich as a modern, economically dynamic state with growing international influence.

The organiser of the 1936 Olympics, Carl Diem, wanted an event linking the modern Olympics to the ancient.

The idea chimed perfectly with the Nazi belief that classical Greece was an Aryan forerunner of the modern German Reich.

… In 1936 the torch made its way from Greece to Berlin through countries in south-eastern and central Europe where the Nazis were especially keen to enhance their influence.